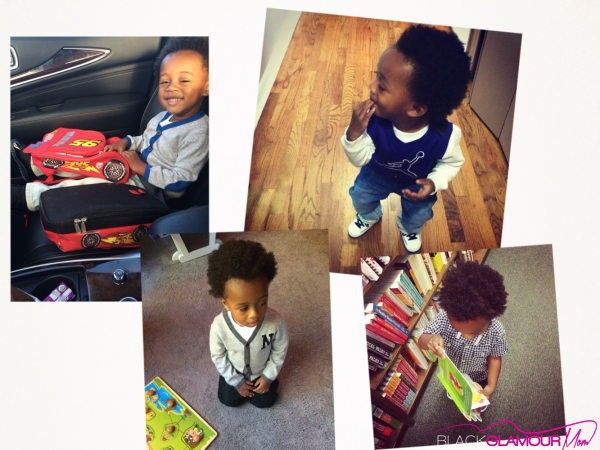 It has been almost two months since I’ve become a mother of a two-year-old, and let me tell you glams, this ride called motherhood has gotten a little bumpy!

I’m willing to bet you a pair of Christian Louboutins that I am just as, if not even more in love with my little guy than I was the moment that I first laid eyes on him. However, I would be telling a major lie if I didn’t admit that my world has gotten much crazier now that he’s the BIG 2! Not only is he extremely busy, I’m talking dragging jeans and shoes across the master bedroom floor, but he is also super determined to have things his way, and I mean his way all of the time.

I’ve honestly finally gotten to the point that I’ve accepted that this is just one of the many stages that he’ll go through as he continues to grow and develop into the person that he was meant to be.

With that in mind, I decided to round up five truths that I’ve learned since becoming a mother of a two-year-old.

No More Relaxing Dinner Outings
If you’re a new mom who hasn’t gotten to this stage yet, do cherish, and I mean do cherish your evening dinners out. I totally remember the times when my husband and I would do dinner and our son would be quietly sleeping in his infant seat. Fast-Forward to now and our family dinners are spent reminding our son that you can’t sling the salt and pepper shakers off of the table, nor can you throw your food across the floor!

You Must Learn To Ignore Some Of The Tantrums
They don’t call it the terrible two’s for nothing! However, just like they say “choose your battles,” I’ve also found that you have to choose which tantrums you are really going to address and which you aren’t. I’ve gotten to the point where I’ve embraced the notion that it’s part of their development and I’ve figured out little tricks to deal with it (Check back for a later post on that!)

Throw Your “Neat Freak” Dreams Out of the Window
Being a mommy to a two-year-old has meant really accepting that nothing is going to stay the way you originally left it. Despite my efforts to continue to keep my house as immaculately clean as I did pre-baby, having a two-year-old changes the game. You will totally drive yourself insane trying to pick up every little thing around the house. My best piece of advice is to try to designate free zones around the house, those places where you don’t mind things getting a little messy.

Now Is The Time To Start Establishing Routines
I love structure. I always have and probably always will. It would come as no surprise that my husband and I try to establish routines with our son when it comes to bedtime, eating and just day-to-day interactions. Again, we aren’t perfect, but I have found that creating those routines help with all of the uncertainty and craziness that is going on with toddlers at this age. They expect and need structure.

Have Fun!
Despite the craziness of it all, I am loving every moment of it. Our lives have definitely transitioned, but we wouldn’t have it any other way. He brings so much joy to each of our days. I would definitely say that this is one stage to soak it all in, take lots of pictures and steal tons of kisses and hugs.

So glams, do any of these truths sound familiar? We want to hear from you! Share your thoughts and some of your own truths in the comments section below.