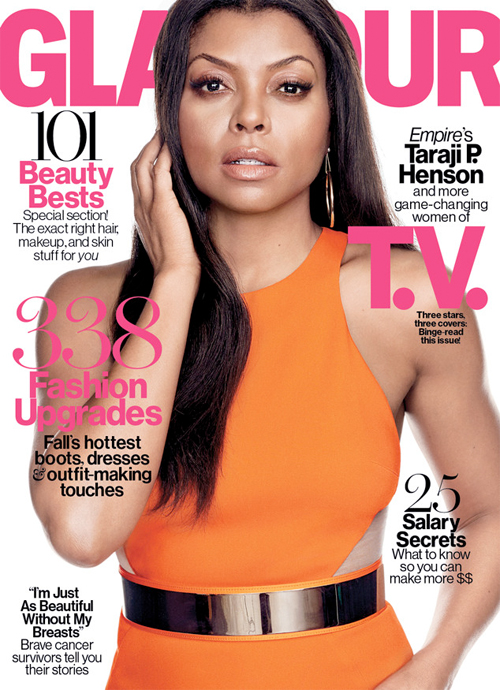 Don’t you just love when a #glammom consistently slays?

Case in point: Actress and Mother Taraji P. Henson looks stunning on the October cover of Glamour’s TV issue. The actress, who will surely have all of us moms running to the nearest gym, talks not only about her starring role as “Cookie” on Empire but also about her life growing up as a single mom.

“When I got pregnant in college, people said, “This is it for her.” But I did not stop. I never missed a class. I was in the school musical when I was six months pregnant—we just made the character pregnant. My mother swears Marcel came out doing the dance; he had learned the choreography. When I graduated, I carried my son across the stage. I wanted to be an actress; I moved out to L.A. with him. People were like, “Are you crazy, moving to California with your son?” My father was like, “Leave him home.” I said, “I can’t leave my son at home.” [And eventually] my father said, “That’s your baby. That’s your blessing. He’s going to be your strength.” And you know what? He was. I didn’t have time to go to the club to “network.” That’s B.S. No business deals go down at the club. So I didn’t get caught up in that. I had a mission. I had to make my dream come true. If I didn’t, what was I proving to my son?”

Taraji goes on to also discuss that inner strength that each of us holds inside of us.

“When I don’t feel fear. Fear will cripple you, fear will kill you, fear will make you believe you’re not worthy. After 17 years in prison, Cookie feels there is nothing to fear. She made it out alive. In her mind that’s how strong she is. We all have that strength inside us. We just have to choose it.”

To read the full article be sure to visit glamour.com

When Hanging Out At The Apple Orchard Turns Into A Photo Shoot... BlackGlamourMom Kitchen Cheat Sheet: Stove-Top Pasta and Cheese Recipe