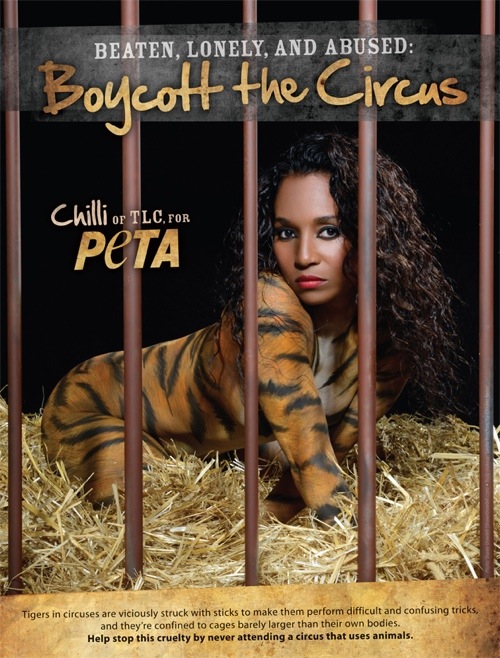 We over at BlackGlamourMom love to spotlight celeb mommy’s who not only keep the glam, but also one’s that find it important to stand up for causes that they truly believe in. Let’s face it, how glam is it when you can not only knock a look out the park, but also find the time to voice your views on subjects that are equally important to you.

With that said, we were super excited to hear about TLC Singer Rozonda “Chilli” Thomas stripping down for animal rights.

Chili stars in a new ad campaign for PETA for a call to “Boycott the Circus.” The ad is super glam!

According to the ad, in which Chilli appears in body paint to resemble a tiger, the animals used by circuses are beaten and, when not performing, locked in cramped cages.

“There’s so much cruelty behind the scenes, which is a something that a lot of people don’t get to see,” Chilli said in an interview with PETA. “They’re being mean to them to make them do this trick .… And I think that everybody needs to be aware of what’s really going on.”

She continued, “If you can raise awareness to something that’s important, such as this, then you should… Because I know for a fact that I would never want to be in a cage.”

Chilli joins a list of celebs including Jada Pinkett Smith, Edie Falco, Sarah Silverman, Alec Baldwin, Cloris Leachman and Olivia Munn who have joined with PETA to publicly denounce circuses that use animals.

I must admit, I have absoutly not only gone to, but enjoyed attending a circus in the past. However, this new ad campaign definitely causes me to stop and think about whether or not this will be something that I will look to share with my son in the years to come.

We over at BlackGlamourMom want to hear from you. What do you think about Chilli’s new ad campaign for PETA. Share with us your thoughts in the comments section below.