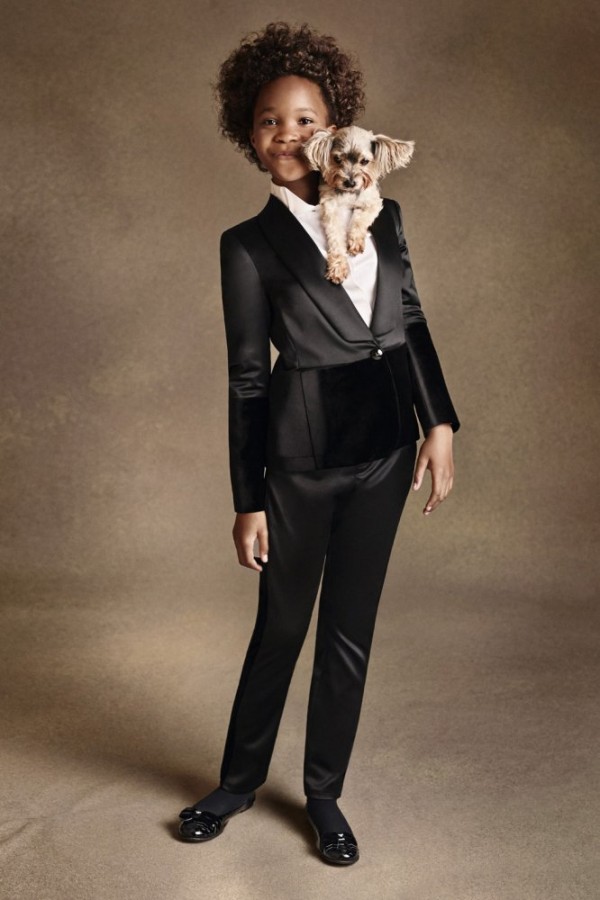 We over at BlackGlamourMom live for all fashion news, which is why we are so excited for 10-year-old cutie-pie and actress Quvenzhané Wallis, who has been chosen as the face of the Armani Junior brand. This marks the first time that the luxury brand has selected a child star as the face of the line.

Quvenzhane, who is set to star in the Annie remake in the fall, shared her excitement about the partnership. “I’m so happy to be chosen by Mr. Armani to be his ambassador for Armani Junior,” she said, in a statement released by the brand. “I felt the same excitement when I got cast for a major film. Me? Wow! I was honored to wear his custom gown to the Oscars. It made me feel like a princess. When I saw Mr. Armani‘s Prive‘ show in New York, the dresses were so pretty…I had too many favorites. Afterwards when I met him, I realized Mr. Armani is such a nice man. I liked that that he was so thoughtful. It’s fun to wear Armani Junior since I really like the clothes. It’s young. It’s cool. My friends are going to want to borrow all my clothes.”

Giorgio Armani also shared why he selected Quvenzhane. “Quvenzhane is so talented, despite her young age. Her kindness, curiosity and openness towards others really struck me, as they are all traits I admire. It is for this very reason that I wanted her to be the face of Armani Junior. With her insatiable energy, Quvenzhane made the clothing come alive, interpreting it in her own singular way,” Giorgio Armani said.

Armani Junior is Armani’s luxury brand for children and teens.

Glams, what do you think? Will you snatch up a few cute pieces for your child from the collection?